A weak low-pressure centre (Invest OWS60I19) over the Arafura Sea is expected to consolidate to a Tropical Low northeast of Darwin on the 3rd. It will then move WSW-SW to pass north of the Tiwi Islands, Nothern Territory late 4th while gradually deepening. Model guidance confidence is MODERATE that this Tropical Low will deepen to Tropical Cyclone intensity on the 5th-6th over the Timor Sea and move southwestward towards the Pilbara coast. 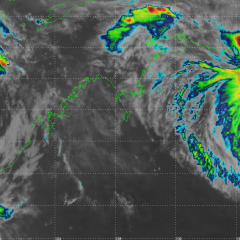 Severe Tropical Cyclone Veronica over the NW Shelf has maximum winds of 90kt. It is expected to move SE and make landfall near Port Hedland at Category 4 intensity tomorrow morning. After landfall, STC VERONICA is expected to slow down and move erratically before moving W-WSW on the 25th along the Pilbara coast towards the NW Cape.

Severe Tropical Cyclone Trevor is about to make landfall over the NT coast, SE of the Pellew Islands. Trevor has maximum winds of 100kt near the centre and expected to weaken slightly before landfall. It will then weaken steadily overland.

Both Severe Tropical Cyclones are set to bring destructive winds and heavy falls.